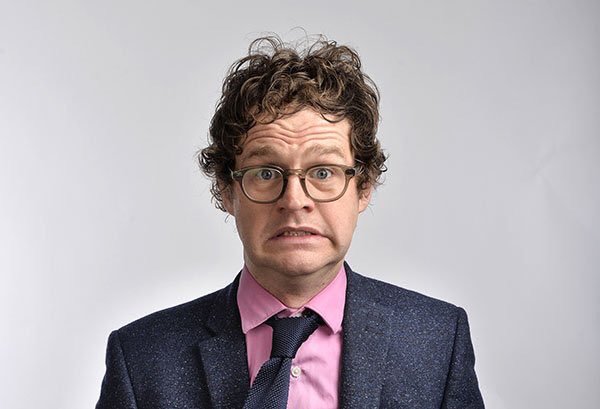 Mark Dolan is a comedian, writer and TV presenter.

Host of Channel 4’s iconic comedy series Balls of Steel, Mark also fronted three hit series of globetrotting documentaries for C4 (The World’s …and me) – in which he met the most extraordinary people on the planet, including the smallest man, tallest woman, richest teenager, cleverest child and the owner of the world’s largest breasts! A bestselling book followed the series,The World’s Most Extraordinary People and Me, published by Harper Collins.

Mark’s first big break came with the C4 hidden camera comedy series The Richard Taylor Interviews, in which he posed as a lunatic boss, interviewing unsuspecting candidates for a fictional position in his company. Mark also hosted the Mad Bad Ad Show for C4 with Micky Flanagan as team captain, and spent five years at Sky indulging his passion for movies as the host of their flagship film show 35mm.

Mark also launched both E4 and More 4, fronting new shows for each channel. For E4 he presented the anarchic comedy programme Show Me The Funny and for More 4, the late-night topical chatshow The Last Word.

Mark began his career as a stand-up in 2000, reaching the final of the live C4 stand-up competition You Think You’re Funny. Since then he has performed stand up all over the world and is currently previewing his brand new 2016 show 10 Things You Need To Know About Life.Mark’s first love is radio and in the mid 90s he cut his teeth in the media as a radio producer. In February 2014 he returned to the medium, fronting a mid-morning show on Fubar Radio, the world’s largest comedy radio network with a weekly reach of 500,000 listeners.

Since then, Mark starred in the hit Channel 4 series Taxi Gags, featuring some of the UK’s leading comedians telling gags in the rear of a black taxi! He also hosted a sequence of Text Santa for ITV1.

Mark has just shot a movie panel show pilot for Sky 1 called There’s Something About Movies, a topical comedy show called The Buzz and he recently showed off his cooking skills, winning the Celebrity Come Dine With Me Special. He is currently developing a live comedy show called The Sex Guru, in collaboration with sexologist Wolfgang Weinberger. The show will embark on a nationwide tour later this year, alongside a monthly residency in the West End. The show has been optioned for TV and is currently in development.

Mark performs at a wide array of corporate events too, having fronted multiple events for Sony, AB InBev, Samsung and the FT. He has also voiced some of the UK’s biggest brands on radio, television and online!

Most recently, Mark risked life and limb co-hosting the TV comedy panel show If Katie Hopkins Ruled The World for TLC; it became one of the most talked about shows of the year.

Mark lives in Highgate, North London and is married with two young sons. His hobbies are running, drinking tea and agreeing with his wife.

“Just wanted to pass on our thanks to Mark for Thursday, he was absolutely brilliant we couldn’t have asked for any better, just what we wanted. It was a great evening, big success, so thank you both for helping us bring it together.” FREELANCER OF THE YEAR AWARDS

“Mark Dolan was a dream to work with, absolutely fantastic from start to finish. From the minute he arrived to the very end, Mark fully embraced the event with his charm and professional wisdom. On stage Mark captured the Pimms theme perfectly with a seamless and effortless comic flow throughout which extended off stage with his constant personal interaction embracing the entire occasion including all the guests, staff and crew.” PIMMS MY SUMMER PARTY CAMPAIGN WINNERS EVENT 2011

“Mark was extremely professional, polite and friendly. He arrived promptly and was well prepared, he even took the time with me to make sure his speech was worded correctly and that he was going to pronounce staff members names correctly. There was no real “celeb” status, he was very down to earth and a pleasure to be around.” LILAC SKY SCHOOLS 4TH ANNUAL EDUCATION AWARDS 2013

“Mark did a great job and received some very positive feedback from our guests.” SPEAKERS CORNER