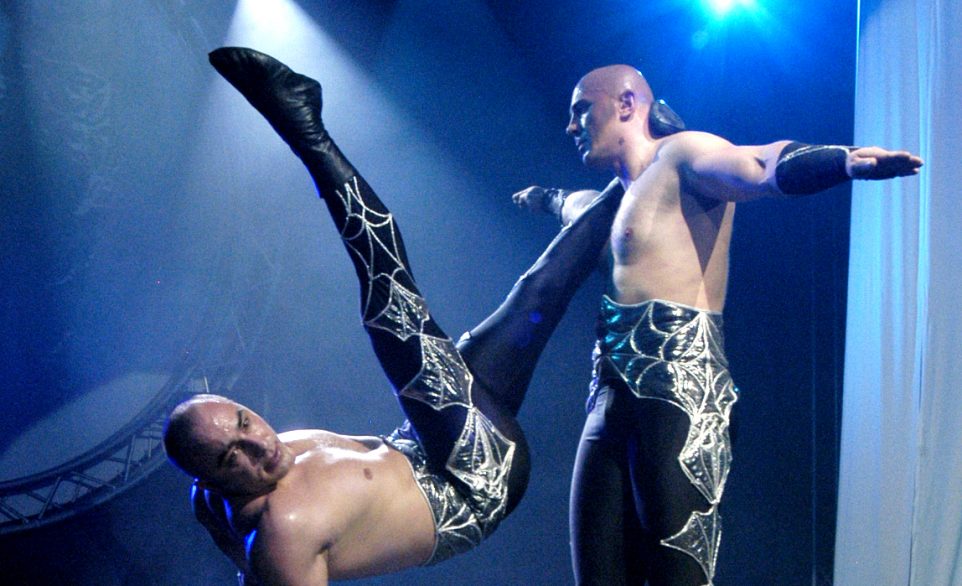 Ferenc Rippel and Viktor Rippel (with ninefold world records and two State Awards) are one of the most popular stage performers of all around the world. In the last ‘Quarter of a century’ with their professionalism and vocation, they have conquered and gained everything which was offered by the art of artiste. After more than 10,000 successful performances both the producers and the audience adore them. They were on tour with the Ringling Bros. Barnum and Bailey Show and they also participated 9 years in the shows of the Moulin Rouge – Paris. With their artiste performance, they have visited all of the metropolises of the world. In 2013 they won the Spanish ‘Got Talent’ TV Show (Tu si Que Vales) which was another international appreciation from the audience and the representatives of their profession.

Ferenc and Viktor grew up in show business, their parents were acrobats who performed a “pirate” routine (called Trio Cortez) in circuses and revues throughout Europe. They began competing at the age of four in sport-gymnastics, a popular form of acrobatics. From 1982 to 1990, they attended the renowned Hungarian artist school, the Hungarian State Performing Arts Institute. After they graduated from High School in 1990, they began developing a hand-balancing routine in Russia, which eventually made them perform around the world. Both of them measure 180 centimeters/6 feet’s in height and weight 80 kilograms/180 pounds, making a perfectly matching and harmonic appearance on stage. Changing their positions in all possible directions and dimensions, supporting each other’s entire body weight even above the head! The Rippel Brothers act contains elements of adagio, hand balancing, and acrobatics, all melded together to make a spectacular show.

The Shows of the Rippel Brothers represent outstanding values, since they present the variegation of the art through a spectacular and breathtaking journey in which we can experience the classical theatre, the shows of the Casinos of Las Vegas, the atmosphere of the Circus and the magic of today Sci-Fi movies. The dramaturgy of the performances are simple so everybody can easily take in but these are still amazing. During the show, there are combined the world of the circus, the music and the dance. Moreover, the whole performance is embedded in the future. Because of its complexity, the performance is able to address a wide stratum of the audience.

In this performance, the present combines with the past and the future. The teaching of the show: love and respect.

CIRQUE – Circus Theatre
Colourful and breathtaking performance with the perilous stunt of the Rippel Brothers!